Under the Same Sky

From WikiFur, the furry encyclopedia.
Jump to: navigation, search
Culture > Videos > Under the Same Sky 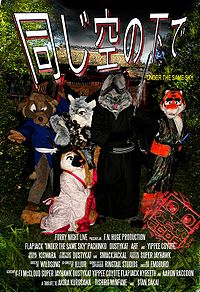 Under the Same Sky is a video production which chronicles a young bunny's powerful journey to becoming a true Samurai.

Shot entirely in 1080i High Definition on location at Chairo Raccoon’s Ringtail Studios and Hakone Gardens in Saratoga, California, it is a tribute to the work of Akira Kurosawa, Toshiro Mifune, Stan Sakai, and many other samarai films and stories.

Disgraced and drunken former student, Katayama, returns to face his Sensai who is teaching a new pupil, Toshiro. Katayama uses a dirty trick and kills his former teacher. Toshiro vows to avenge his master's death someday.

One year to the day of his master's death, Toshiro challenges Katayama to a duel of honor.