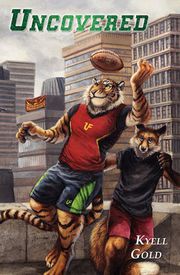 Uncovered is an anthropomorphic novel written by Kyell Gold and fourth in the "Out of Position" series of novels. The cover art and interior illustrations are by Blotch, and it was published by Sofawolf Press in July 2014.

Picking up where Divisions left off, Devlin Miski and Lightning Strike head to Crystal City to film a beer commercial. Dev meets the actor he’s supposed to be with on camera: a wolf named Keith. While talking to make themselves more comfortable, Keith talks about his acting career and how gay roles are hard to get. After filming the commercial, Lightning Strike tells Dev that Keith might be gay but no one else on the Firebirds is. When the boys return to practice, Fisher Kingston recovered from his injury from Isolation Play, but is acting more aggressive than usual. Dev spots Argonne, a gay fox groupie, outside the team hotel and wonders who he has been with. Hal Kimmel, the swift fox, tells Lee that Vince King’s family is suing Families United over the death of the bear. Lee gets excited but Hal reminds him to stay focused on what is most important to him: the Yerba job. Brenly, Lee’s father, talks to his son and asks him to talk to Eileen again to apologize for what happened in the previous book. The Firebirds get ready for their first game in the playoffs against the Pilots. Fueled by the loss against the Pilots last week, the Firebirds play much more aggressive and they win, ending the season for the Pilots. Dev invites Lee to the after game celebration. Dev notices Fisher’s odd behaviour again when Colin confronts Dev and Lee about their relationship. Lee leaves, overwhelmed; and Kodi, a brown bear who plays for the Firebirds, comes out to him. While talking to Peter Emmanuel, Lee decides to go for the scouting job in Yerba instead of the gay rights one in Chevali, meaning he would have to move out of Dev’s apartment. Hal helps Lee get more information about the Vince King case. Brenly tells Lee that instead of pushing Eileen, he should at least apologize to her and vice versa. Gena, Fisher’s wife, tells Lee that he’s invited to watch the next game with the other players’ wives including Colin’s. Dev asks Lee if he thinks anyone else is gay on the team, to which he says no. Fisher continues to be more aggressive during a meal with Dev, Lee, and Gena as well as in the locker room in Bolait. The Firebirds go to play their next game against Bolait. During the first half, the score is about even. As the second half goes on, Fisher gains a concussion and is forced out of the game. The Firebirds end up winning, putting them in the championship game against the Sabretooths. Just as Lee leaves the stadium, he is assaulted by a drunk wolf who recognized him as Dev’s boyfriend. Lee decides to press charges and write a statement. Later, Gena tells Lee about the drugs she found in Fisher’s locker, which has side effects similar to Fisher’s newfound anger. When Lee heads back to the hotel, he starts writing a file to the court handling the Families United case.

Dev returns to the hotel to have drunk sex with Lee. The next day the boys travel home to Chevali, where the whole town is fired up that their hometown team is in the championship game. Ogleby tells Dev that Ultimate Fit wants to film another commercial with him because of their contract. Hal has lunch out with the boys where he asks Dev if he can talk to Fisher for his head injury article. Lee tells Hal later on that Fisher is suspected of taking steroids with muscle growth so he can keep playing football. During the week, Dev and Lee go to film the second Ultimate Fit commercial, during which one of the lead actors injures their foot and is taken out. Lee replaces their spot and films the shoot with Dev. When they get home, Dev discovers Lee is working on the court case about Vince King, which devastates him that his own boyfriend can’t be himself around Dev. When the tiger brings it up over dinner, the two get into a small blow-up. The next morning, Dev wakes up to an empty apartment. Lee gets an email from a lawyer saying Dev’s brother, Gregory, is involved in the Families United case. Lee decides that the best way to keep Dev from being distracted is to leave the apartment until the championship. Hal agrees to let Lee stay at his place. While settling in, Lee tells Duscha that her son is involved in the Families United case and to promise not to tell Dev about it. As Lee succumbs to a cold, Hal takes him out for tea. When they return, Lee calls Emmanuel where he invites the fox and Hal to Yerba to watch the championship game.

As the Firebirds practice for their championship game, Dev asks Strike about ways to focus on football for the week, in which he tells him to get out more to keep his mind off the stress. During Media Day, Brian reappears in the crowd and badgers Dev with questions about being gay until Dev gets mad, saying he wished he never came out. When he's finished, Strike offers to go on a double date with him and Iva, Strike’s partner from the beer commercial. During the meal, Dev’s “date" tells him that a little distraction is good because it helps with focus. Hal shows Lee the article about Dev on Media Day, to which he thinks its Dev’s way of breaking up with him. Eileen calls him soon after, presumably about Dev’s quote. Lee tells her that her turning her back on her parents is no different than Lee and Dev’s situation. After a night out with Charm, Ty, and Zillo, Dev returns to the hotel to find Argonne and, distracted by the urges of sex, takes him up to his hotel room. But right as Argonne gets ready to blow him off, Dev recognizes a scent on his muzzle. Lee and Hal travel to Yerba to watch the championship game with the Whalers’ scouting team; including Peter Emmanuel and Jocko, the bear who previously talked to Lee on the phone.

During the game, the Sabertooths start out well but the Firebirds manage to keep up so the score is 7-6 at halftime. Fisher worsens his concussion during the game, but Gerrard tells him to keep playing anyways knowing it'll probably be his last game. Lee talks with his future coworkers during the game about the outcome. The Firebirds manage to gain a lead near the end of the game by a few points; but when the Sabertooths get a field goal in the last six seconds, they end up winning the championship game. The Firebirds head back into the locker room in despair, with Coach telling them that they should be proud for making it this far. Afterwards, Dev’s father Mikhail tells him he's proud and should get back out on the field when the crowd goes silent.

Polecki, a coyote playing for the Sabertooths, comes out in front of everyone at the stadium, leaving most Firebirds in shock. But Dev feels better knowing another player has come out. After Dev gets Polecki’s number, he confronts Colin, whom is revealed to be the one Argonne has been sleeping with on the road. Colin tells Dev that it doesn’t count as real sex and leaves. Kodi calls Lee after the game, where Lee tells him that he can trust Dev with his sexuality. Polecki invites Dev to dinner where he tells him his story of discovering his homosexuality. The boys agree to keep in touch in the off season. For the rest of the day, Dev thinks about his relationship with Lee. When he's invited to play video games with the others, he defends Strike when the others talk bad about him over a comment he made about Ty. Strike them calls him to say their goodbyes. As Lee heads back home, Eileen calls him to say she's leaving Families United because of their actions towards Vince King. Excited, Lee tells her that they can always talk anytime. Dev returns home with the rest of his team to Chevali to a cheerful crowd, including a kangaroo rat who tells Dev he came out to his father because of him. When the guys separate, Dev heads to Hal’s apartment to find Lee and the boys agree to fuck before they talk about the future.

Wiley "Lee" Farrell- A gay red fox who gets back into gay activism, Dev's boyfriend, Brenly and Eileen's son.

Hal Kimmel- A swift fox who works as a freelance reporter

Gena- A tigress; Fisher's wife who finds out her husband is using drugs

Colin- A religious fox who plays for the Firebirds and resents Dev for being gay. Main antagonist of the book.

Kodi- A bear on the Firebirds who comes out to Lee