Umnus Nightcreeper (also known as Shadowstalker) is a character in Extinctioners. He first appeared in Extinctioners volume 2, issue 3: "Countdown to Extinction" Part 4. The story and pencils were by Shawntae Howard, inks by Sara Palmer, and lettering by Carole Curtis and Fender. 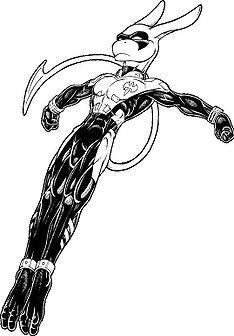 Umnus is from the planet called Eden, which can be considered Alden's sister planet. While enjoying a typically hot sunny day of hunting with his comrades, Eden was attacked without warning by a unknown aggressor. The Remalons tried to mount a counter offensive, but their technology was far too primitive against the onslaught of the alien Omega Hunters. Umnus himself was captured and was held as a test subject. He overheard orders to destroy the planet and all of its inhabitants. He witnessed the destruction of his home world on the view screen of his captor's ship. To add to his shame, the alien invaders shaved off his long beautiful mane, which to male remalons is considered a sign of pride, strength, and adulthood. 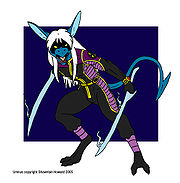 Umnus was rescued by Red Firefox and the other Extinctioners members and vowed to join them and help them defeat his attackers in the hope of regaining his personal pride and to reclaim the pride of his fallen people.

Umnus's inspiration was partially made by Nightcrawler, but he was more influenced, believe it or not, by Spider-Man and Lockheed the Dragon. He was originally going to be a dolphin, but mutated into, well, whatever he is now. Umnus can only telewarp one individual other than himself and can produce subsonic sounds, normally used as a mating call, but it also acts like echo location allowing him to "jump" anywhere without reappearing inside of something solid. He's also an excellent swimmer like all Remalons and is nocturnal by nature.