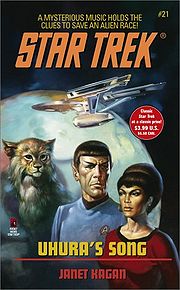 Uhura's Song, by Janet Kagan, is novel #21 in Pocket Books' series of original Star Trek novels, published in January 1985. It features two sister feline races, the Eeiauoan and their lost ancestors, the Sivaoan. A deadly plague among the Eeiauoans threatens to spread into human space. The Enterprise and its crew must find Sivao, the lost homeworld of the Eeiauoans, whose present felinoid inhabitants may have a cure for the ADF Syndrome.

The author makes it clear that both races are tool-users, having hands and prehensile tails, but never states whether they are bipedal or quadrupedal.