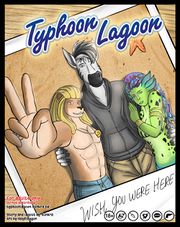 Typhoon Lagoon is an adult-oriented webcomic. It has been authored by Sunkra since 2010 and was released to the public on its own domain website on the 13th of April 2011.

This webcomic follows the story of Sunkra the otter and handles different kinds of subjects, of which some controversial like the usage of soft and hard drugs as well as sexuality in many of its forms. The story takes place in the imaginary city Typhoon Lagoon and combines a modern setting with fantasy elements.

The first chapter 'A precious thing' is introductory and short, it serves mainly to showcase the close relationship between the characters Sunkra and Milo. The following chapter is named 'Just another day'.

The cast is made up by a couple of leading roles and a secondary supporting cast for now.

The revised version of Typhoon Lagoon is drawn by SpyPolygon.

The Typhoon Lagoon website is redesigned to arrange the old comic pages in a separate gallery and display the pages of the new and revised comic prominently in their stead. Pages first appear on the website and are posted to the furry galleries a week later.

The Typhoon Lagoon project took on its first form as soon as the author Sunkra started to develop his writing style and worked more for the furry audience than for anyone else. Sunkra not being a furry himself at the time but enjoying the company of many furry friends, created the otter with the similar name for recognition purposes and very soon developed more and more of the character’s story. Expansion went on gradually and the city of Typhoon Lagoon was born, a seemingly tropical paradise not for the prudish or stingy. Sunkra found it difficult to come up with a name that befit his project and a name both embodying conflict and serenity seemed the best option. Around the last couple of months in the year 2010 Sunkra felt the urge to take this fantasy world beyond the written medium. He wanted to share it with a larger audience, something which written stories simply do not attract.

The Typhoon Lagoon comic ran from 2010 through 2012 until its unfortunate hiatus, Sunkra was unable to find a new artist.

In early 2014 Sunkra found a new artist in SpyPolygon, comic pages will be released every other Wednesday starting the 30th of July.