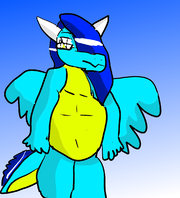 Tyler discovered the furry fandom when he was twelve. Before he was a furry he was a Sonic the Hedgehog fan. At the age of fourteen, he came out to his parents about the furry lifestyle. He joined the furry fandom on IMVU. He is a part of the macro/micro, transformation and fatfur trends in the fandom. Tyler has autism and likes drawing his dragon sona.

Since 2012, Tyler has been more involved in being a brony than a furry. In 2013. He started to play furrymuck.

In 2021, Tyler got involved in playing VRChat.

Tyler was originally a red-furred, two-tailed kitsune with the ability to shapeshift and sizeshift, so he could be any size he wanted. However, in 2010, after seeing the movie Alpha and Omega, he dramatically changed his fursona into a werewolf. He was once a dragon but changed back to a wolf after seeing his totem animal at Wolf Haven International while on his way to RainFurrest 2011. In 2012. he changed his fursona into a horse. He was a wolf for awhile again, and a brown shire horse since Fall 2013. His fursona is now[when?] a Blue Dragon.

Tyler's other characters include Takuma the Bear and Kujira the Orca.