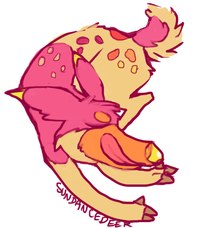 Sundancedeer, or Rook and previously known as Paradraik, (born 1989) is a pansexual female-to-male trans-man. He is a furry artist and fursuiter. While Sundancedeer is his identity in the art community, he prefers to go by "Rook" and thinks of it as his real name to those he meets online.

From 2009 onwards, this person took up a new identity of Sundancedeer, and no longer associates with the "Paradraik" identity.

Sundancedeer spent most of his early life pretending to be an animal. His style of IRL role-playing was strongly influenced by The Lion King. His parents recall that he would sometimes watch the movie multiple times a day. He was eventually forced to grow out of walking around on all fours, so he adopted art as an alternative creative outlet. Before discovering the furry fandom, his primary interest was dogs, and then Pokemon. He believes that drawing Pokemon characters and original Pokemon-inspired creatures for years allowed him to develop his drawing skills. 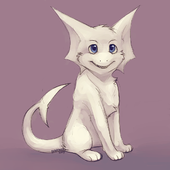 In 2003, Sundancedeer designed his first fursona, named "Snowy." Snowy was originally a Draik on Neopets, that granted him access to the Draik Clan forums, where he shared art and sometimes role-played. When Sundancedeer quit Neopets, he kept Snowy and continued to update her design over the years that followed, but the white-furred dragon with the body of a mammal stayed consistent through all changes.

"Paradraik"'s internet endeavors (2003-2010) most often occurred on her deviantART account and LiveJournal under the same name. He was briefly a member of Furry Teens and various oekaki boards under the alias Para.

In the summer of 2013, Sundancedeer discovered that he was more comfortable as a male than the gender of which he was born. He came out to immediate family and friends the same year, and is strongly considering hormone replacement therapy at this time.

Hailing from a small city in western Massachusetts, Sundancedeer attended Greenfield High School where his furriness was known by very few of his friends. He graduated in 2008 and went on to community college for art and psychology. His long-term goal was to become a successful freelance artist. In 2011, he decided to major in computer information systems and web design, but still does art on the side. His future plans include attending a state university to complete his Associate's degree.

Sundancedeer started attending furry conventions the same year, his first being FurFright 2012.[1] He has also attended Anthrocon 2013. His fursuit character is a species of chibi dragon created by Eris_Valgen. It is his first suit and was won in an auction, dubbed "Old Diamond" instead of renaming the character.

Sundancedeer is a digital artist. His work covers many subjects, from animals to surrealism, anthro art to photography. His first website, art-mafia.net (domain expired), was where his best works were archived circa 2005. In 2011, he registered and designed deerdance.net, which has since been taken offline. He plans to redesign the site in the future.

The art he uploaded to deviantART is all "in storage" (ie. not visible to others). He made a new deviantART account (dA username sundancedeer), but has since abandoned it, leaving the gallery intact. Sundancedeer is currently only uploading art to Fur Affinity and Tumblr. 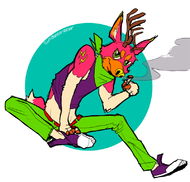 Sundancedeer's fursona is a pink and orange piebald deer, named "Sundance" as a tribute to the old western outlaw, the Sundance Kid. Incidentally, Sundance cannot actually dance, and is not a fan of hot, sunny weather.

In addition to being a representation of the artist himself, Sundance has his own personality in a parallel storyline. Sundance can be hella rude—no filters on swearing and he will gladly tell it how it is. He often appears neurotic-looking, or sleep deprived, with exaggerated features to emphasizes certain facial characteristics. Drug use, bloody noses and prison tattoos, (although none consistently appear in canon drawings), are some common themes in art of this character.

A partial fursuit of this character is in the making. Why, I Otter... has begun working on the sleeves.