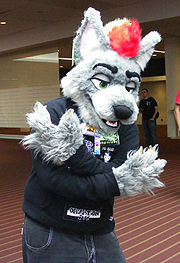 Twitch has been involved in the fandom via multiple conventions, furmeets, and charity events since 2002. His first furry event was Anthrocon 2002. Twitch was IndyFurCon's fursuiter Guest of Honor in 2013.[citation needed]

Twitch's artwork generally revolves around inside jokes, obscure music references, video game references, sarcasm, and random silliness. His music remains unheard, while what little recorded with him ended up on demo tapes with local bands in Vermont.

Twitch has since become the lead singer of the fursuit rock band Furry Punk Rock Massacre which debuted at IndyFurCon 2013.