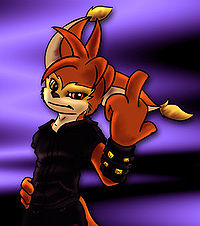 Twilight (formerly known as Twilight Ookami, Twilight the Wolf and powerofknuckles) is a male furry artist best known for his 3D design and animation.

Twilight's fursona was a wolf, but is now a lynx. He decided to keep the name intact, for a hint of spice. Some of his more popular works are the Super Smash Bros. Brawl-themed "New Challenger Approaching" bonus images (example: Bonus pic - Blazger) that were included free with his commissions, prior to the release of the actual game.