Twig Mouse as Frenzy the ferret, at Conifur 2004. 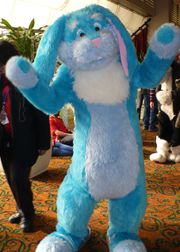 Twig strives for correct proportion in the head design of his fursuits. In order to have realistic eye placement, he utilizes a system of mirrors for vision through the eyes, while allowing them to be placed further apart. Both Chitter and Sage's deer suit use this method.

The deer mouse is more of a totem animal to Twig than a character.