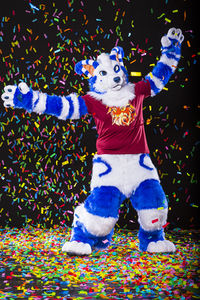 He is active on steam under the name Tuqiri.[4]

Tuqiri's fursona is a Crux. His fur patterns run all over his body in random shapes and sizes which are a dark blue in color. He has retractable claws that can be hidden.

Two fursuits have been made of Tuqiri. His current fursuit was commissioned from Fursuit Creations, and was debuted at the Brumfurs Furmeet.[2]

Tuqiri.net was founded 10th February 2010 by Tuqiri and Nican since then the site has turned from a testing ground for making website styles, into a portfolio of created work by Tuqiri.