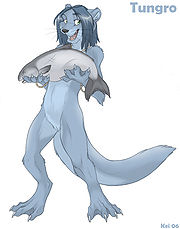 Tungro (born July 1985, Helmond, The Netherlands) is a 9ft tall blue anthropomorphic otter with white feathered wings. He relocated to Aberdeen, Scotland in 1993 and has lived in the West Midlands, England, Reading, Berkshire and Didcot but now resides in Sandhurst. He identified himself with furry at the age of about 12 but was not introduced to the furdom until 2002. His first foray into furry was on the IFPL in 2003, and thanks to Giles Gourry EuDraco found the #northukfurs IRC channel. His first meet was in the middle of September 2003, which was a LondonFurs meet. He is currently active in the LondonFurs, NorthernFurs, and HantsFurs communities, and is part of the ConFuzzled UK furry convention in the roles of Registration Coordinator and Deputy AV Manager.

Tungro is a graduate of the University of Warwick, completing a Masters degree in Computer Systems Engineering in June 2007 and graduating with a Masters of Engineering (Hons) at a 2:1 level. He was employed by a small IT consultancy company, responsible for supporting the sales team by creating sales demonstrations and being the person they approach with anything technical. This developed into a full consulting role for external clients, mainly in the healthcare sector. He now works for a larger IT company as a consultant for clients requiring high volume transaction processing systems.

"Tungro" is the name of a non-important character in Brian Jacques' novel "The Legend of Luke", part of the Redwall series. However, it is also the name of a rice crop disease, and this is generally where the name is attributed to.

Outside the fandom, Tungro enjoys photography and also tinkering with computers. He is also a scuba diver, having obtained the qualification of PADI Open Water Diver.

Tungro also enjoys travelling around the country. "SouthPaw's apprentice" is a nickname that has been used to describe Tungro in the past, in reference to his growing knowledge of public transport.

Tungro has been a guest DJ in the history of TigerTails Radio, and has taken part in the Comic Relief Red Nose Day 2007 charity show, where green gunk and porridge (mixed with shaving foam) was thrown over his head. The event was highly successful, raising £700 for Comic Relief.

He has attended a number of conventions and meets: