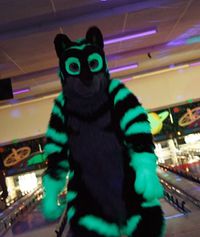 Tundran under UV lighting at a local Bowling Meet.

Tundran (born October, 1994) is a fursuiter and occasional photographer. She lives around Brisbane, Queensland, Australia.[1]

Tundran was introduced to the fandom in early 2014 and since then has become a regular face in the local furry community. The character and fursuit has now been taken over by Jessica, and is still active in the furry community (2017).

Tundran's fursona is a tiger/snow leopard cross. His patternation features a black body with grey belly markings, and a vast amount of UV green fur on his hands, feet, parts of his face, and stripes that run all along his arms and legs. Prominent features that identify him are three chevrons down his back, a "V" shape over his eyes in green, and a rough "M" shape in black on his chest against the grey of his underbelly.