Tsuneko is a character in the comic series Andorozon created by Ken Singshow but was also featured in Extinctioners comic series created by Shawntae Howard. She is a fox Anthroid. 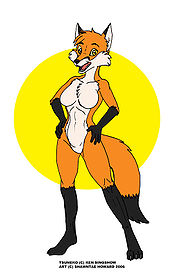 Tsuneko Lennox is the military portion of Andorozon team. She is a professional sniper and almost never misses. She was trained constantly in a VR environment when she and there others were still under the control of Dr. Van Burden. It has taken her a while, but now being away from Van Burden and the VR environment, she has finally adjusted to humans and knows that they are not all evil. She had trouble adapting at first but when she learned her half-brother Karabiner, one who she cares for so much and has a special bond with, is also somewhere in the world, she became much more positive. Like Merry, Tsuneko is also very good with human children probably due to a natural instinct. Being a fox, Tsuneko is very agile, fast and is great at stealth and hiding.

These abilities always give her the technical advantage over adversaries and because of them, Tsuneko is hard to be detected by enemy scanners. Both the Andorozons and the ECS suspect she might have a cloaking ability. If she does, Tsuneko hasn't told anyone. When battles get to out of hand Tsuneko is able to exchange for lower body for her T.A.U.R. (Terrain Adoptive Universal Runner) Centaur part. This mode gives her super mobility, more speed and the ability to carry heavy weapons, making her into a war machine. While in TAUR mode, Tsuneko can carry up to two other team members on her back. When not in battle or guarding Haruki's home, Tsuneko tends to listen to British punk rock music while knitting and making quilts. It seems an odd hobby for her but she is very good at what she does. Tsuneko also has a very strong sweet tooth. While being basically fearless like all of the other girls she does actually have a small phobia of bugs. She hopes the others won't find out about this because she fears that the ECS will exploit her fear and make her useless in battle.

Tsuneko hopes for a time when all their fighting is over so she can look for her lost half brother Karabiner and return to the Scotland forest they were born in, living out the rest of their days together in peace.