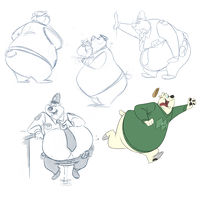 Truck is a furry who lives in West Yorkshire within the United Kingdom. In real life, Truck has worked as lorry driver, Scenes of Crime Officer, a lecturer and he is now[when?] working as Broadcast Engineer. Truck is a fan of cartoons and most animation. Over the last 3 years[when?] he has gained an interest in film and TV production, which saw him move into broadcasting in July of 2013.

Truck's fursona is a toony polar bear who stands just under 6'5", with a fair bit of a gut on him. He is usually dressed in a flat cap and green jumper. He is a bear that loves nothing but watching cartoons, playing video games, hanging out with good friends, and being there for those he cares about. He also love a good cup of tea.

During the day, he works as a police officer and he is a member of the Her Majesties UK Police Force. He is a typical bobby on the beat and he can be often found enforcing the law in most doughnut shops, bakeries, and pizzerias, seizing all those tasty delicious foods and keeping the public safe from harm.

Truck is a bit laid back, but when he is on duty he always has a stern look on his face, which usually changes the moment food is presented in front of him. Despite this, he is not afraid to enforce the law.

Diesel is not really a fursona for Truck, but Truck also likes woolly mammoths so Diesel is there to fill that gap. Diesel is your typically fat guy, but he is slightly in denial over it. He gets hungry very quickly and you do not want to be near by when this mammoth has a hunger pang.

Even though he is very tall and big, Diesel was still able to find a Hawaiian shirt that almost fits. He is usually quite grumpy and does not like to be called fat, as "all mammoths are puffy".

Moriarty is Truck's fursuit. Moriarty is a very fluffy toony dog and was created by Deezlberries. Despite his name, Moriarty is a silly dog who likes to give out hugs, receive belly rubs and sniff out tasty snacks.