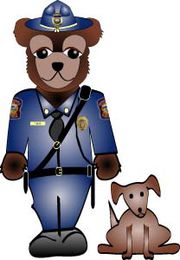 Trooper Bear is the anthropomorphic bear mascot of various highway or safety patrols throughout the United States of America.

Trooper Bear of the Iowa state patrol (part of the Iowa Department of Public Safety) is "a walk around mascot [... which] was introduced to the public at the Iowa State Fair" in 2005.[1] His "introduction and dedication" took place on August 11, 2005.[2]

For the Florida Highway Patrol, Trooper Bear is an "inflatable, wearable, and huggable bear in a trooper uniform" that first appeared at a 2006 event in Orlando.[3]

There is also a Trooper Bear associated with the Kansas Highway Patrol.