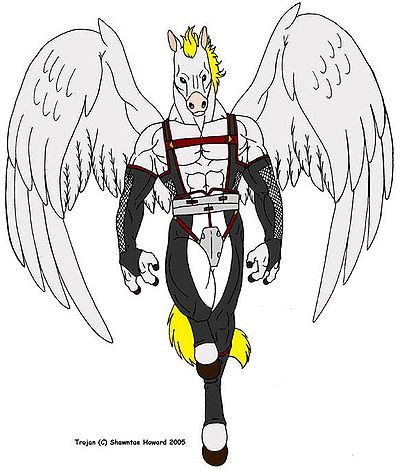 Trojan is a character in Extinctioners.

Once a Commanding officer in the pegasus flight patrol of Maelstrom's army in Eden, the Biblical Garden of Eden where evolved mythical animals have taken the position of care-takers of the reigm, he was cast out of the garden and into the regular world once Unicor regained control. Now, on Alden, he usually tries to keep a low profile, since pegasuses don't just walk around (he being of a mythical race). But when the offer to join a group that could help him get revenge on those that helped bring down Maelstrom's rule (and thus his position of luxury) he jumped at it. Aside from the ability of flight his wings give him, Trojan is 4 times stronger than the average equin.

Trojan and his Hunter, Cupid.
Retrieved from "https://en.wikifur.com/w/index.php?title=Trojan&oldid=479990"
Categories: