Trishcabob Ratgirl's Fursona. A comparison of the original versus recent design.
Trishcabob Ratgirl (Patricia Sierra), simply known in the community as "Ratgirl", is a furry character designer and the owner/artist of Ratgirl Productions (Founded February 2010). Born in August of 1983 in Northern California, Ratgirl was fond of anthropomorphism at a very young age and began creating her own animal cartoon characters by the age of 10; though really had no idea of the existence of furry fandom until nearly 2 decades later. Ratgirl was officially self-designed as a cartoon character in 1998--a tan anthropomorphic rat with brown hair and eyes, black nose and tail, and pink in the ears--the alias Patricia has kept ever since, and now additionally utilizes as her business figurehead and mascot. Because of this, while the level of artwork has improved significantly over time the overall physical description for her rodent self has stayed the same.

Ratgirl became active in the furry community in 2010, after finding numerous furry-run websites like Fur Affinity and Furry 4 Life. In 2012, she finished making her own (and first) fursuit partial for Ratgirl and debuted it at Further Confusion the same year. Furry fandom has impacted Ratgirl on a family level as well, becoming Fluffy's (JC's Fluffy Tail) mate in 2013, now happily married since 2015. 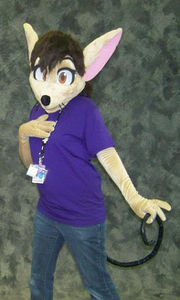 Ratgirl's Fursuit Created 2012 by Ratgirl Productions
Ratgirl is a self-taught general cartoonist, character designer, and illustrator; with major focus in furry, anime/manga, comic, and "Disney" inspired styles throughout her works which has produced an interesting portfolio. Ratgirl Productions is her full-time art business, founded in 2010, where she creates and sells original works, attends and promotes at many types of conventions, self publishes books, and does artwork commissions for a growing client-base. She works in both Traditional as well as Digital art mediums. Her various favorites to work in traditional are Ball-point Pen, Chalk Pastel, watercolors, Prismacolor Pencils, and art markers. For digital, preferred tools of the trade are Photoshop CS5, Manga Studio EX5, with a Wacom Intuos 4L Tablet and more recently a UGEE UG2150 Drawing Monitor.

Conventions are a big thing for Ratgirl, both on a professional and personal level. Having a love for animation of all types, she began attending as a fan in 2002; her first event being FanimeCon 2002. By late spring of 2010 Ratgirl Productions debuted as a vendor at various conventions, attending not only as a fan but also as a professional. In 2011 Ratgirl began to head plans with fellow professionals for a new multi-fandom convention and non-profit corporation by the name of Fan-culture Arts and Media Exhibition, shortened simply to F.A.M.E. A labor of love, F.A.M.E. has undergone a lot behind the scenes, and will be ready for more public event announcements in the coming years.

Puppetry is another love of Ratgirl's, and by similar extension fursuit building and fursuiting. The Ratgirl partial was created in January of 2012 and in May of 2012 she unveiled a ten-foot tall Dragon puppet (used in the FanimeCon 2012 Cosplay Spectacular stage performance adaptation of the anime Record of Lodoss Wars). These craft beginnings are what formed the idea for the Pawstruck label.

A collaborative comic project called CBI: Critter Bureau of Investigation began between three artists; Ratgirl, Mystic Eden and Rainbow Ichi; on December 13th, 2011. The story revolves around three anthropomorphized bear detectives who solve various crimes set in the year 3045. The first issue of this full-color mystery comic is currently on hiatus due to various schedule differences between the artists involved. Updates can be viewed at fb.com/CBIComic

Since January of 2010, Ratgirl has been part of BAAU (pronounced bow or baʊ), an acronym for the Bay Area Artists Unite group, based in Northern California. BAAU produces a yearly art and comic compilation book called BAAU Down, and works from Ratgirl Productions can be found in various books beginning with volume 11. More recent BAAU Down books can be found for purchase at the Amazon website, with reproductions of older volumes as a community goal.

In 2012 Ratgirl joined the Bay Area Furries Meetup group (BAF for short), based in Northern California. Ratgirl attends occasional meets and over time has helped grow another neighboring NorCal furry community (more on that further down).

2012 was also a big time for the Ratgirl Productions brand, with a formation of a costuming and craft sub label called Pawstruck Suits & More. Begun initially as a joint venture overseen by Ratgirl Productions, more recently it has become just as much a full time business focus as the parent company. Pawstruck makes custom fursuits, plushes, puppets and other crafts for an expanding client pool. Pawstrucksuits can be found at Facebook.

2013 brought on much more furry community involvement regarding Ratgirl. After being assigned as one of the lead admins for a blossoming furry group called "Central Valley Furries", CVF is now one of the larger all-ages friendly furry groups in Northern California. CVF has enjoyed a monthly fursuit bowling meetup since April 2015 in Modesto, CA, with many other monthly and annual events (including March for Babies fundraising) in and around the California Central Valley. CVF - Central Valley Furries can be found on Facebook.

Self identity: The creator of Trishcabob Ratgirl is nonbinary so if you approach, Ratgirl appreciates she/her or they/them pronouns. Trishcabob Ratgirl herself as a fursona identifies as an asexual cis female, while the artist behind Ratgirl, and secondary fursona "Delailah" the gryphon, identify as a pansexual, bigender, nonbinary individual. Correct pronoun use is important to Ratgirl, and will always do their best to show that respect in kind to others.