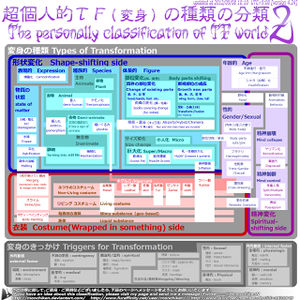 A chart by Monchiken showing a variety of tropes in transformation fiction, written both in English and Japanese.

Shapeshifting can be a rich symbolical and narrative tool. Today, the theme appears in many fantasy, science fiction and horror stories; some would even recognize a distinct subgenre of shapeshifting or transformation fiction, with its own genre conventions. Fantasy and science fiction occasionally feature races or species of shapeshifters, and both magic and technology can be used to impose a change in form. Some of the more popular themes include werewolves, vampires, age progression and age regression. In a broader sense, the trope includes stories about characters who shrink or grow in size without changing their form.

Transformation in this regard is physical, as opposed to the character development common to many stories, even with no fantastic element, which typically involves characters changing mentally, psychologically or spiritually.

Science fictional transformation fiction tends to feed a sense of discovery and suggest the unlocking of potential. This may be an analogy for the idealization of the experience of a teenager who discovers that puberty has changed his body, including increased strength and physical ability. Jack L. Chalker's Wellworld series is an example of this sort. The eponymous planet is populated by hundreds of different species, each in its own territory, and visitors become residents by being forcibly transformed at the polar immigration entry points into a member of a randomly selected resident species. Fantasy transformation fiction is often mystical or dynamic, focusing on the change of the person's identity when transformed. This may be an analogy for learning to take a different perspective. Patrica A. McKillip's Riddlemaster of Hed series includes transformations of wizards into mountain sheep, ancient trees, ravens, and even the wind; each change leaves its mark on the essence of the wizard who transforms. In T.H. White's The Sword in the Stone, the wizard Merlyn transforms young Arthur into a variety of animals so he can learn from the animals the lessons he will need to be a good king.

Horror transformation fiction captures a feeling of fear, of people suddenly becoming monsters, of yourself becoming a monster, of things prowling in the night that used to be human. This is possibly an analogy for emotions that are so strong, they rip away one's rationality and leave one a beast. An American Werewolf in London is an example of horror-centered; a young man is bitten, and without his permission or desire, becomes a creature of darkness that exists to kill.

Transformation can also be viewed as a metaphor for puberty and budding sexuality, such as in the Disney film The Shaggy Dog. In the story, the teenage protagonist Wilby Daniels finds himself under the curse of a ring reputed to having belonged to Lucrezia Borgia that causes him to randomly transform into a sheepdog. This happens concurrently with the arrival of a beautiful and exotic neighbor that Wilby has a crush on; throughout the film he finds himself helplessly transforming into a dog, frequently in her presence. Most tellingly, this happens at a dance where he is slow-dancing with her — an activity that might cause the average adolescent male to find himself getting an erection; though this gets filtered into him growing shaggy hair and becoming a beast, essentially his animal instincts take control of him and he rushes away from the social activity humiliated.

In some stories, an unexpected but welcome transformation (especially various forms of lycanthropy) plays a thematic role similar to the plot device of the protagonist being a commoner who finds out they are actually royal, or have unsuspected magical talent, or have some other wonderful unsuspected destiny. In others, a transformation imposed from without by a hostile entity is a challenge to be overcome; the protagonist seeks a way to reverse the transformation and regain their original form. In many such stories, the final resolution involves the unwillingly transformed protagonist coming to terms with their new shape and turning it to their advantage rather than finding a way to return to "normal".

Many children have animal transformation fantasies and shapeshifting is a well-known feature of fairy tales, such as the story of the Frog Prince. Interest in transformation isn't limited just to them, though; the concept captures some imaginations of all ages. The subject is rather obscure and there's no established term for those who like transformations; the general expression is just "TF fans". Note that having an interest in shapeshifting is distinct from belonging to therians, otherkin or any other group that actually identifies with or wishes to become something else.

It is possible for this interest to be sexually charged, or to accentuate other fetishes; for instance, forced shapeshifting can lend itself well to themes of dominance. The result is a transformation fetish.

Websites and online communities about transformation exist, both clean and otherwise, although for someone who e.g. just likes coming across shapechanges on TV, a site dedicated for appreciating them might be entirely too much. The Transformation Story Archive is a prominent example of its kind.

Two currently prominent webcomics feature transformations for their own sake: El Goonish Shive is technology- and magic-based and more character-driven, while The Wotch is somewhat younger, magic-based and considerably more madcap.