Toxxik takes part in fursuit dance competitions at conventions, and she took third place in the novice division at Biggest Little Fur Con 2015. 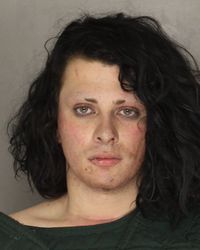 Ian's mugshot from her arrest in Pittsburgh during Anthrocon 2017.

Toxxik previously lived in Thousand Oaks, California, USA.[4] Whilst living in California, she was charged with more than 15 criminal acts that dated to 2011,[5] including vandalism, battery, possession and use of narcotics, trespass, and resisting an officer.[6]

Whilst attending Anthrocon 2017, Toxxik was found on the third floor of the Westin Convention Center at 12:45am, when the floor was not open to the public.[5] Allegheny County Sheriff’s deputy William Kisner was working a security detail in the Westin at the time, wrote in a criminal complaint, and told Toxxik to leave the area. Toxxik, who was wearing a dress and high heels, became enraged and cursed at the deputy, then landed a two-handed push on his chest and tried to go past him.

Deputy Kisner then attempted to place Toxxik under arrest, but she responded by kicking and screaming. As a hotel security guard helped restrain her, Toxxik screamed racial slurs at the officers and threatened to kill them. Toxxik was booked and charged with simple and aggravated assault, two counts of "ethnic intimidation", making "terroristic threats with intent to terrorize another", and resisting arrest.[7]

Toxxik initially refused to give her name, and was booked into the Allegheny County Jail as "John Doe".[5] Officers later took fingerprints, which enabled them to identify Toxxik, and discovered she was wanted in California for violating her probation on a felony drug conviction.

The state of California applied to have Toxxik extradited, "because of his criminal history and his danger to the public".[5]