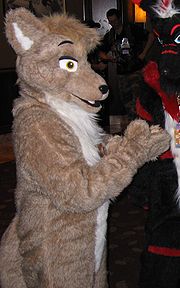 Towyn Coyote is a fursuiter from Clearwater, Florida, United States. After moving out of his parents home in Clearwater he relocated to Orlando Florida. After about a year he moved again and is now living in Marietta, Georgia with Durango Dingo. He is on staff for Oklacon as Volunteer Coordinator.