Tora Tora Tokyo is a 20-page adventure/comedy webcomic drawn and written by Nekonny and co-written by SoulKat. It was inspired by a real-life trip the two of them took to Japan in the spring of 2015, and the situations shown in the comic are based on events that happened to them. Rather than appearing as themselves, Nekonny and SoulKat are replaced by Tina (from Caribbean Blue and Paprika) and Tiggs (from the Las Lindas side comic Learning Curves), respectively.

The pages were originally posted on the Katbox Forums, but that site has been removed. Nekonny has since posted the webcomic on MediBang.

Tina and Tiggs travel to Japan, where they take in many of the local sights as tourists. Tina (representing Nekonny) is a seasoned traveler used to walking long distances. Tiggs (representing SoulKat) becomes fatigued by Tina's travel schedule. The two of them share great enthusiasm for the sights, but often draw the curious stares of the locals (depicted as the same featureless generic people Nekonny uses to populate the backgrounds of Caribbean Blue and Paprika).

Unlike other Katbox comics, Tora Tora Tokyo was not published on the site itself, but is instead updated within the forum for Nekonny's works. SoulKat uses this environment to share photographs of the trip and impart the firsthand details behind each installment. 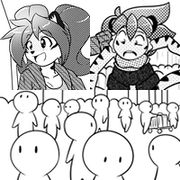 Starting with the left image, Tiggs, Tina, and Snowmen.

Tiggs is the big tigress who serves as SoulKat's representation in Tora Tora Tokyo. Inexperienced in the ways of Japan, Tiggs often finds herself in hilarious predicaments.

Tina is the small tigress who serves as Nekonny's representation in Tora Tora Tokyo. Experienced in the ways of Japan, Tina serves as Tiggs’s tour guide. Tina does maintain her playful self as seen in Caribbean Blue and Paprika.

The Snowmen are the miscellaneous background characters in Tora Tora Tokyo, Caribbean Blue, and Paprika. Here, they generally represent the background population of Japan.