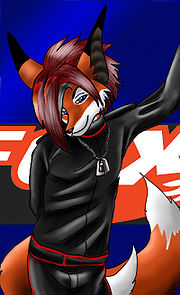 Topher as drawn by Sorandra.

Topher, also known as Foximus or Topher Focks (born August 19, 1987), is a Fennec Kitsune furry. Topher is most recognised by his extensive background working on professional racecars in both the ARCA and NASCAR circuits. He is quite possibly the first furry to have worked on and pitted a NASCAR Sprint cup series racecar, as well as being the tallest fennec in the fandom.

Topher is a twin-tailed kitsune. He stands at 6'4" tall (over 7 foot if you count the ears.) At first glance, he has all the standard fennec markings, but the colors are off. He has dark rust orange fur, dark gray inner ears and paw gloves, and a white chest. Both tails are marked the same, dark orange, gray band, white tip. In his left ear is a large silver industrial piercing, which has a feather hanging from it, and has been known to have a "Remove before Flight" Tag clipped to it by his friends from time to time for their own amusement. His eyes are a piercing blue, not cold, but not warm either. His expression, and the exact color of his eyes varies based on mood. The only other Given for him is the silver chain around his neck, the chain has attached to it a pair of simple silver engraved dogtags. One identifies himself, the other he keeps near him at all times, as its from a fallen comrade that he still holds dear. He has no back story, no family history, having walked out early on. He's most commonly seen dressed in large boots and gloves and dark, industrial themed clothing, going well with his strong mechanical abilities. He keeps his kitsune age and abilities hidden, the two tails the only clue, identifying him as "younger".

Topher is also a small time, self taught graphic artist. Starting out small, his company, ShadowFox Graphics is still gaining recognition as its reorganized, and is expanding beyond just vehicular graphics. Starting in 2007 MRD was designing shirts, hats, jackets, firesuits, banners, etc. Topher considers himself to be fairly successful, despite a high profit. He has had over two dozen pieces get featured in real life.

Topher is a 24 year old male, who has spent the better part of his young adulthood in the field of professional stock car racing. A highly skilled mechanic, knowledgeable, and quick on his feet, Topher has worked in all major forms of autosports. USAR Hooters Procup, ARCA Remax, NASCAR Camping World Touring, NASCAR Camping World Truck, NASCAR Nationwide, NASCAR Sprint Cup. His racing experience also played over into travel, letting him see 25 of the US States while working. Having spent the last 4 years moving from team to team in various positions, from race day pit crew to lead mechanic, to car chief, he has currently put racing on a "hiatus" as he focuses on higher education. He is still employed by the #43 ARCA Remax Series team of Bill Martel Racing, and does sponsorship PR and website maintenance for the team when he cannot work on the cars. He also travels with them to as many of the events as possible so that he can to perform his race day duties as a rear tire carrier. He graduated from the Pittsburgh Institute of Aeronautics with an Associates Degree in Aviation Maintenance in 2011 and now living in Myrtle Beach, SC. 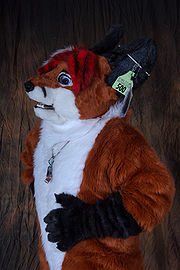 In 2008, Topher commissioned a "Version 1" suit of his Fennec character from Hyena Girl. The suit was completed in June 2008 and made its debut at Anthrocon 2008. it has since been seen at Furfright 2008 and Midwest Furfest 2008, where he partook in the fursuit games.

When he was still residing in North Carolina, Topher was commonly spotted at the Ashville and Raleigh furmeets. Upon his return to Eastern Pennsylvania, he was a regular at Protocollie and Littlewolf's furmeets and events, as well as the Lupine Meets in Allentown.