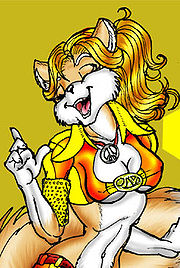 Topaz is a character in the webcomic Jewel Vixens. She is a petite 18 year old red fox with bright golden yellow and white fur with white tailtip, gloves, and boots.

Topaz is the "ditsy blonde" of the group, but her perpetually happy attitude and amazing skills as a gymnast and 'finder' have given her quite a valuable role in the team in keeping morale high and infiltration a breeze. Her favorite activity is surfing, and she won't hesitate to make use of a bright, sunny day at the beach when the opportunity arises. Jade managed to teach her how to pick-pocket, though Topaz doesn't really understand the purpose of it. She is also the only Vixen who's still attending high school. Not only is she a top member of her school's surfing team and gymnastics squad, she's also an accomplished cheerleader. Her main weakness is her lack of strength and a way of refusing to harm when she doesn’t see a need for it, not understanding the concept of violence. She was introduced into modeling by way of her mother, who happened to be a fashion designer who grew up in France.