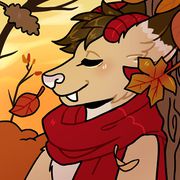 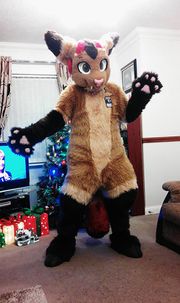 Took Southpaw, also known as Took or Tookfluff (Born May 16, 1994) is a Furry Artist, Fursuiter and Fursuit Maker from Cornwall, United Kingdom.

Took's main fursona is a Tufted Deer, Fennec Fox, Mountain Goat hybrid under the same name. Her most notable features are long fennec fox ears with mountain goat horns that curl under them, small tufted deer snaggle teeth and hooves. Took's colours consist of mainly natural colours, beige, cream and brown, but she has a burgandy red stripe on her tail, red spots on her back and red horns. She is a herbivore with an affinity for watermelon and can be drawn both anthropomorphic and feral.

Took built her fursuit herself, under her hobby fursuit building name, Chars Creature Creations [1] and debuted it at Confuzzled 2016. Took is active in the South West of the UK and regularly attends the Sotonfur meets, the Cornwall furries meets and the SouthFurs meets.

Took was first introduced to the fandom in July 2007 through the Pokemon and Neopets fan-oekaki Sutaro Sketcher. [2] It was here that she created her first fursona, a fluffy orange feral dragon character named Saffie in August 2007. [3] Took joined Furaffinity in 2009, under the username Charzard03. It was around this time that she created Charvee, a feral purple and orange fennec fox fursona heavily inspired by the Pokemon Eevee [4] Charvee was created to be a fursona that better represented herself, whilst Saffie remained an OC. Charvee was Took's main fursona between 2009 and 2015.

In late 2013, whilst studying at university, Took decided to dabble with Fursuit making and created two fursuits for practice. Tillum, a dragon-rabbit hybrid and Lake[5], a Salamander. Tillum was sold at material costs, whilst Lake was debuted at local sci-fi and comic convention Devcon Plymouth, in May 2015. The fursona Took was created shortly after, in June 2015 and was the first character she had created with anthropomorphic proportions rather than feral. Took was created specifically with a fursuit in mind and is a hybrid that she feels matches her personality and interests. Took created a new furaffinity on the 2nd June 2015 to reflect these changes and was officially known by the name of Took within the fandom from SouthFur Camp 2015 onwards. After meeting several other furries on the animation course she was studying and on other courses at the University, Took organised various small meets at the 8-bit bar in Falmouth, when time would allow for it. At this meet furries at the University could hang out and play games of an evening, these small meets later merged into what would become the Cornwall furries meets, in 2015, which Took is now staff for.

Took's secondary fursona is Jupiter, a purple, orange, black and white, space cadet lop eared rabbit created in 2016.[6]Saffie and Charvee, Took's previous fursonas are still regularly used as OC's. Took has 20 furry in characters total, including 3 My Little Pony OC's [7]. Many of these were created when she first joined the fandom or adopted from other people. 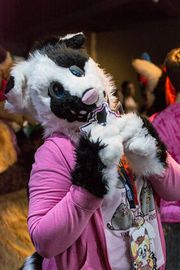 Took currently owns two active fursuits and one retired fursuit. She is currently saving to get her secondary fursona, Jupiter made into a fursuit for late 2019.

Took has attended several furry conventions and events, shown below