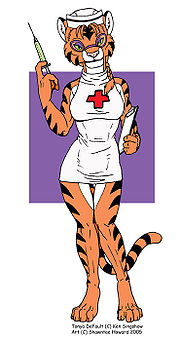 A Tiger anthroid, Tonya De Fault is the resident mad scientist of the ECS organization. She appears as a slightly ditzy and absent minded, but that is just on the surface. When focused, Tonya really is a genius and creates the weapons and devices the E.C.S. uses. Being a tiger, she is physically very strong but she usually stays in her lab or control center where she can use her intellect. Tonya is just as fiercely loyal to Dr. Van Burden as her other two sisters but she wonders what the ultimate goal Dr. Van Burden is trying to archive, beyond world domination and destruction of Andorozon.

Tonya is usually stuck trying to keep the peace between the constantly bickering Zora and Pandora. She also looks out for the well being of Chekari 2 who she pours her maternal love on. Tonya envies Andorozons for their strong bond with each other and wishes her family had the same. She even sympathizes with her enemy. Tonya hopes that after the conflict is over, she will be able to help raise her brother Chekari and see him grow into the strong man she knows he'll become. First appearance in Extinctioners: Issue 10.