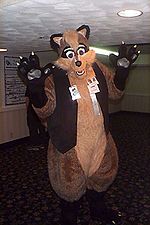 Tony Ringtail is a fursuiter who lives in Cranbury, New Jersey, U.S.A. His fursona is a raccoon.

From childhood, Tony felt comfortable around animals, particularly raccoons, which he would occasionally draw. After learning about furry fandom on the Internet in 2001, he began to view the raccoon as his totem animal. 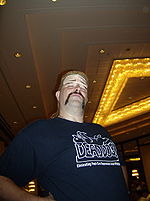 In 2002, Tony attended Anthrocon, and soon after decided to make his own fursuit. Tony wears his costume at furcons, and also at children's hospitals, parades, and other public events.

Tony is also the founder and President of Caring Critters, a non-profit fursuiting group based in Central NJ.