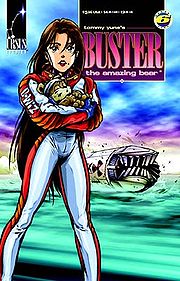 Tommy Yune is a comic book author, game designer and anime director who became known for his manga-style artwork on Speed Racer and Robotech.

Yune first began in comics with the 1993 anthropomorphic series Buster the Amazing Bear. The issues were released on a semi-regular basis while he designed video games such as FX Fighter and The Journeyman Project series. He also maintained a presence at ConFurence for much of the 90's. After completing the first story arc of Buster, he joined Wildstorm Productions where he wrote and illustrated Speed Racer, Racer X, and Danger Girl: Kamikaze.

In 2001, he left Wildstorm to join Harmony Gold USA and directed Robotech: The Shadow Chronicles in 2006. Though there is some promotional artwork on the web for a second comic series, the date of Yune's return to Buster the Amazing Bear is undetermined.