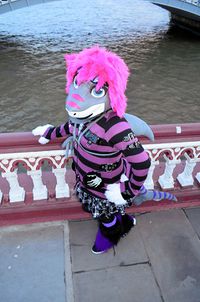 Tombi, as seen at LondonFurs 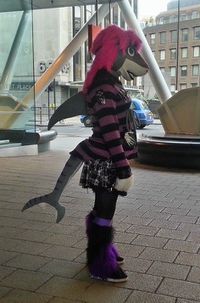 Tombi's hometown is Peterborough, and she spent most of her life living in Newcastle upon Tyne. The name "Tombi" comes from the protagonist of the Playstation video game Tombi!, which is still is her favorite from her childhood. "Itachizame" translates to "tiger shark" in Japanese, since she had a fondness for Japanese culture. Tombi lives with her fiancée, Imvula, and their two cats.

Tombi joined the furry fandom in 2010, through an introduction from someone whom she was romantically involved with at the time. Before she joined the fandom, Tombi would draw things such as anthropomorphic animals, video game characters, cartoon characters, and tattoo designs; things she was passionate about.