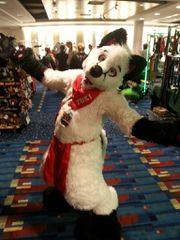 Toklan Umia (Toki for short) is an arctic fox fursuiter from Central Florida, USA. He is a fun and playful character and is never seen without his red bandana. Has an annoying tendency to repeatedly post the same pictures over group chats.