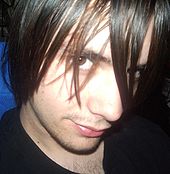 Tokala (b. November 28, 1989), also known as the Furrylilfox and Tokala Nasu on Second Life (real name Mike Genzoli,) is a male furry artist who lives in Humbolt County, California, USA. As of April 2010 he is attending college for a Digital Media degree. Tokala seeks furs interested in cheap commissions, going as low as $1 (USD). He is mated to Oreo The Fox.

Currently, Tokala's fursona is a fox, more specifically a red fox and fennec fox mix. At one point his fursona could change from male to female.

Originally, Tokala's fursona was just a female, but in 2007 he made the drastic change of giving her the ability to select a gender at any time. Tokala, as of recently in 2012 made the change to his fursona to being strictly male.

Tokala the fox has teal fur, green hair with a large black stripe on the tail and stands at about 3 feet (about 5' 11" in real life).