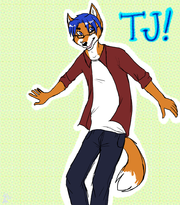 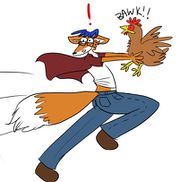 Tj engaged in one of his favorite activities, chicken theft

Tj spent his teen years on the Canadian East Coast, where he developed his love and respect for the outdoors and natural world that surrounded him. He lived 15km out of a small rural town in the Annapolis Valley, where his home was surrounded by forests and wetlands on a long stretch of mountain road.

In the summer of 2005, his family moved back home to British Columbia. Tj had moved from a town population of 1000 to a town with well over 30,000. As much as he missed home, it didn't take him long to make friends and develop ties to his new home that would keep him there.

Having an appreciation for the outdoors he didn't have before, he saw BC as a vast, mountainous wilderness just waiting to be explored. Again he fell in love, only this time with the coastal forests of Vancouver Island and the west coast.

Tj was first introduced to furry culture in the summer of 2004 by his best friend. He became very interested when he learned the interests of the average furry were not far from his own. Being a fan of cartooning and animations, as well as role-playing and exploring his imagination, he found himself overwhelmed with the idea that people like this could exist in great numbers.

On November 5, 2004, Tj joined the furry fandom and began work on his character. During his early years, he felt the need to express himself and his new ideas, so he began work on a series of sci-fi stories and had intentions of becoming a writer. He also began work into becoming a furry artist.

He was eager to attend his first furry convention, as for the first few years, he had never met another fur. It wasn't until 2007 that he attended his first furmeet down in Victoria. Since then, he has attended many events, including BC FurBQ, Howloween, Further Confusion, and Rainfurrest.

Tj still finds himself writing every now and then and continues with his furry artwork and photography, but his real drive in the furry community is getting out to events and meeting new furs.

Tj first fursonas were foxes. The first was designed more as a character for sci-fi stories and roleplaying.

By 2006 he needed a more down-to-earth (quite literally) fursona, Tj, a lovable, silly Red fox who although can be a bit much at times, can also be quite charming and approachable. Tj was designed as an extension of the author, with one major difference; Tj was not a shy character, unlike the author, but It helped him to get over his crippling shyness.

Here are some recent pictures by Tj Bluevulpine.