Tina of the South

Tina of the South is an action/comedy/western webcomic drawn by Avencri and written by G3off. Previously hosted by The Katbox, it is now part of the Kemono Café webcomic community.[1]

Tina of the South started out as a donation drive comic in 2010. 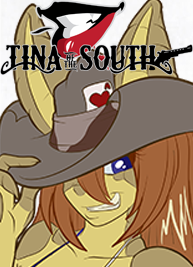 Tina of the South's Official Carousal Banner on Kemono Cafe.

Tina of the South opens on flashback where Tina Winchester wakes tosee a shadowy figure slashing her father with a knife, killing him instantly. Twelve years late, Tina wakes up from the nightmare.

Later that day, Tina is seen with Lucy getting ready to work at the Honey Pot, a dying saloon and brothel in Gold Digger’s Haven. While servicing the tables, Tina overhears two customers complaining about how the town is dying because of the mine's closing and how Luke Winchester was killed for covering up the lack of minerals in the mine. In retribution for their slanderous comments, Tina intentionally pours his drinks on his lap. Before a physical altercation breaks out, Jeanette, the owner, offers the ruffians free beverages and privately counsels Tina about her rage and frustration.

As punishment, Tina is assigned cleaning duties. During her cleaning, she bumps into Clarisse, a chipmunk who just finished with a customer. Clarisse’s chatty conversation is interrupted with the arrival of Three-Chins Joe and his posse. Loud and obnoxious, Three-Chins Joe and his posse terrorize the customers and grabbe hold of Lucy. Tina stands against him but is beaten for it. The other women join her but only inflame the situation. Joe and his posse destroy the saloon and demand rent starting the following day.

Jeanette contacts Dr. Brooks to tend to the injuries. Tina goes after Three-Chins Joe. Using her sex appeal to attract one of the men from the posse, Tina then shoots him. The other two members of the Coyote Brothers are sent out to inspect the noise and found him dead. Tina gets the drop on these two and finally confronts Three-Chins Joe. After a thrashing, Tina ties him and his remaining partner up and takes them into town for public humiliation.

The town is in celebration for several days as they listen to Tina, dubbed the new gunslinger showgirl. She has no problems bragging about her accomplishments, despite Lucy’s fear that someone might seek her out and get revenge on behalf of Three-Chins Joe. Marshal Edward Bradley and Deputy Marshal Gregory Wallace arrive from Nexu, the capital city of Terra Rica, to take Three-Chins Joe into custody. While Edward encourages Gregory to become better “educated on the finer things in life” with Clarisse, Edward awards Tina the 5,000 credit bounty on Three-Chins Joe’s head. After an evening of drinking, Tina and Edward proceed to have relations in her room.

The next morning, Tina wakes up to find Edward gone. Tina becomes enraged after finding a note and a large tip for that one night stand as she is actually a waitress and not one of the prostitutes that work at the Honey Pot. During their breakfast together, Tina announces that she’ll spend half the funds on improving the Honey Pot and the other half on becoming a bounty hunter. After tearful goodbyes, Tina heads out into the Wild West.

Meanwhile, in Nexus, Three-Chins Joe receives an unexpected visit from Hawkeye, a member of the elusive Hazard Company. Hawkeye retrieves the stolen plans and executes Three-Chins Joe for betraying the company.

Chapter Two: The Pride of the Huntress[edit]

The chapter opens with a letter from Lucy to Tina. In the letter, Lucy goes into detail as to how everyone at the Honey Pot misses her and what everyone is doing. Tina is seen chasing seen chasing two criminals. A landslide cuts Tina off from her bounty. Tina tries to go for a shot but an aerial throwing dagger blocks the attack. A Native American rattle snake attempts to kill her for stealing her kill. They fight using mixed martial arts. The Native American rattlesnake cuts Tina’s hair and knocks her out.

While knocked out, Tina flashes back to her arrival at the Marshal’s office in Nexus. While searching for her next bounty, Tina runs into Wallace. From the sounds of it, Wallace made quite the impression on Clarisse. After sweetening him up, Wallace kindly shows an enraged Tina to Edward’s office. Tina brags on how she too is helping out with law enforcement only to have her ego smashed as he doesn’t recall who she was.

Tina finally wakes up in front of Hothlepoya, the flirtatious chief of the Rattlers. Tina freaks out, as she is in the nude, and demands some answers. Hothlepoya explains that Sitala, the Rattler who attacked Tina at the start of the chapter, dragged her back to the village with his daughter, tearing up all her clothes. Hothlepoya had to remove the clothes in order to properly treat her wounds.

Before Hothlepoya continues hitting on Tina, Sitala comes in and throws a new set of clothes at Tina. Sitala explains that she spared Tina’s life after mistaking her for law enforcement. Upon learning that Tina is not, Sitala regrets saving her. While taking a tour of the tribe and checking out the eye candy, Hothlepoya explains to Tina that their tribe has been suffering at the hands of Lenny and George, two bounties at the start of the chapter, with new weapons. At supper, conflict erupts between Tina and Sitala as to what will happen once they capture Lenny and George. Tina needs them alive so she can collect on her bounty. Sitala wants them executed for their crimes against the tribe. Tina proposes that she capture them and bring them back to the tribe for group justice; however, Stiala does not trust Tina to come back with them and proposes that she goes with Tina, which Hothlepoya finalizes.

After supper and late at night Hothlepoya meets with Tina and explains to her Sitala’s hatred toward the settlers. Sitala lost her mother to a group of settlers years ago and has not forgiven any of them since then. Hothlepoya fears that her hatred will consume her. After sharing several tender moments, Hothlepoya and Tina have relations.

The next morning, Sitala waits for Tina to finish her business with Hothlepoya. Upon meeting up with Sitala, Tina is sad that Sitala didn’t bring Bullet, her Stridder, back to the tribe. At that precise moment, Bullet finds Tina.

Tina Winchester is the primary protagonist in Tina of the South. During the twelve years after the tragic death of her father, she lived under the care of Jeanette, working as a “waitress” for the Honey Pot. Despite being surrounded with caring and loving people she considers her new family, the memories of her father’s death continue to haunt her. It is the combination of her love for her new family and her desire to avenge her father often leads to her protecting them both with her rather abrasive tactics.

Luke Winchester is the Tina’s deceased father. While it is unclear as to why he was murdered, rumors have circulated around the community that he was hiding the fact that the mine was running low.

Lucy is one of Tina Winchester’s fellow coworkers at the Honey Pot, working as a waitress with Tina. She appears to be Tina’s best friend. In a letter to her in Chapter Two, she stated that Jim may be asking her out and that she is starting singing lessons.

Jeanette is the owner of the Honey Pot, a brothel. She is Tina’s mother figure, offering her guidance and caring for her well-being. She really does care for the safety of all her coworkers. While she was utterly shocked and concerned for Tina’s safety during her disappearance after Three-Chins Joe’s raid and Tina’s decision to become a bounty hunter, she will always support her choices.

Clarisse is one of Tina Winchester’s fellow coworkers at the Honey Pot. She is a talkative “entertainer.” And by entertainer, I mean whore. While her “dates” only want “relief,” she desire settling down with a nice sensitive fellow.

Three-Chins Joe is the central antagonist in Chapter One. He’s pretty much the Honey Pot and this town’s bully outlaws with his posse. Despite his rather fat stature and chauvinistic demeanor, he was nothing more than a coward who hid behind his posse. After being publicly humiliated and taken into custody to Nexus, he is murdered in his cell.

The Coyote Brothers are Three-Chins Joe’s posse that follows through on any orders given. Tina managed to kill two of them, the first of which was her first actual kill. The third was captured as he threw up after seeing one of his brothers dead.

Dr. Brooks is the local doctor.

Edward Bradley is the law enforcement that came to the Honey Pot and that town from Nexus. Based on his demeanor, he’s more open-minded and adventurous as opposed to his deputy, Gregory Wallace. He had “relations” with Tina, as he thought that she was an “entertainer”

Gregory Wallace is Edward Bradley’s deputy. Unlike his superior, he is rather proper and sensitive, often nervously shrugging away from physical contact.

Hawkeye is a member of the Hazard Company that killed Three-Chins Joe.

Sitala is the daughter of Hothlepoya. She is very skilled martial-artist and knife expert. She is very reluctant to trust Tina after learning that she is bounty hunter and not law enforcement. This distrust stems from settlers killing her mother several years ago. Based on her treatment of stridders, she doesn’t seem to care much for wildlife.

Hothlepoya is the father of Sitala and chief of the Rattler Tribe. He does seem to have a rather flirtatious attitude with Tina. But don’t let that fool you. He does care about his people and his daughter, fearing that her mother’s death is taking her down a dark and dangerous path.

Lenny and George is Tina’s next bounty. They have been killing several Rattlers with new weapons.