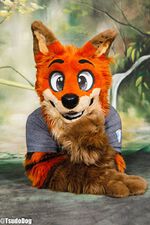 Photograph of Timus the Fox by Tsudodog.

Timus the Fox, or just Timus, also known by his pen name Shaun Martin, is a fursuiter and YouTuber from Miami, Florida, USA,[1] who lives in Pennsylvania.

Timus has attended several conventions in recent years, starting in 2017:

In addition to conventions, Timus has gone to some furry meets in the past as well:

Timus is best known for making furry related content on YouTube including coverage of furry conventions, livestreams, and other random content relating to the fandom. The character’s fictional background is British, although in other media such as the novel he is based on, he is not. Officially, however, Timus is heard sporting an English accent in videos and at conventions.

Although he bears some similarities in appearance to the 2nd fursuit of Kero The Wolf, a former fursuiter and YouTuber, they weren't made by the same people. Timus’ fursuit was made by Miraibaby's A Ginger’s Suits. On November 15, 2019, Timus received a refurbished version of his fursuit head which included a new set of eyes (now pink) along with magnetic eyelids.

Timus began his writing career on fanfiction.net under the name “ernestgoestocamp” and has 13 stories covering a wide range of fandoms. His deviantart account for writing is “fefe46” and also has a total of 13 individual stories (though many of these are short stories involving TF *Transformation* Timus has announced an official original novel by the name “Earthmoon: Journey of Exiles” on his furaffinity page. Date of release is unknown.