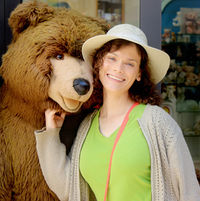 Amadhia Albee[1] (also known as Emily Amadhia Albee, née Timothy Albee) is the sole creator (director, writer, animator, musician and voice actor) of Kaze: Ghost Warrior, which she accomplished in six months on two consumer-grade computers that, combined with software, totaled less than $5,000. One of her 8 published books, CGI Filmmaking: The Creation Of Ghost Warrior details exactly how she accomplished this, so that others might do the same thing with their own stories.

She is private, preferring wilderness to cities, and has done what she has done to help others make their own dreams come true by, "allowing yourself to see the work that needs to be done, to be how you reward yourself and play!"

While not a furry herself, she has praised "The Fandom" as "The most impressive collection of unsigned, independent artists I've ever seen. If it lives-up to its potential, it could be one of the most positive forces in art, in storytelling, in compassion, in mental and spiritual evolution this world has seen in years."

Amadhia was born in Michigan and raised in a very small farming community. She bought her first computer when she was 10 years old with money saved from nearly a full year of bottle and can returns (16KB, Tandy TRS-80 Color Computer). She started college at a state university and then went to CCS in Detroit, leaving college shortly because of disappointment with the faculty's inability to teach her what she wanted to learn. She apprenticed to a flute-master in Virginia for a while, learning to make bamboo flutes, then traveled the Renaissance Faire circuit where she worked as a bard, juggler, slight-of-hand artist, "martial-arts juggler," swordsman and various and sundry other very odd jobs.

She wound up in California in 1991, working as a professional musician focusing mainly on folk and classical harp. She was hired to do sound-production for a small music label where she was first exposed to the Video Toaster. After a few years in "Cali," she took a sabbatical, returning to Michigan to finish her degree.

She started working for a company to which Disney Interactive was outsourcing its Animated Storybooks, and got back into animation. Then she went back to California to be lead animator on Activision's Apocalypse. She then went on to work on Babylon 5, and then to Walt Disney Feature Animation to work on Dinosaur. After her tenure at WDFA was up, she formed "Exile Films," which was rolled-into "Studio Mythos" when offshore investors took over, leading the studio in a completely contrary direction. Securing the company a gig to fulfill her obligations, she left everything associated with Mythos and drove north to live the next 4.5 years in Fox, Alaska.

Amadhia has many close friends in the furry fandom, and Kaze: Ghost Warrior is shown at many furry conventions. She was also once engaged to 2 the Ranting Gryphon.