For other uses, see Timon. 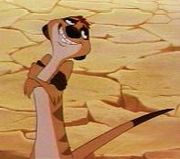 Timon (Greek for 'respect') is a meerkat who appeared in Disney's The Lion King movie series. He, along with his friend Pumbaa, found Simba and introduced him to the "Hakuna Matata" philosophy in the first movie. In the third movie, The Lion King 1 1/2, some of the character's backstory is filled in as the movie focuses on how Timon and Pumbaa became friends.

The character was voiced by Nathan Lane in the English version of the movie.