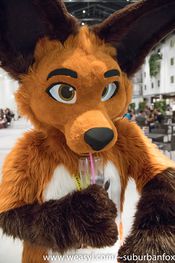 Timmy having a drink in fursuit. Photo by SuburbanFox 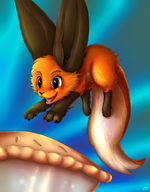 Timmy with a pie. Artwork by Chibity

Timmy Fox, formerly known as FeralFox (real name Timothy, born in October 1995), is a therian fursuiter who lives in Sweden.

Timmy first discovered the furry fandom after seeing an anthropomorphic character being used as a forum profile image, something which made him curious enough to decide to join. He introduced himself as FeralFox on July 12, 2009,[1] a variation of this name later becoming the name of his fursona (Feral 'Timmy' Fox).

He remains a fairly active member of the furry community and has attended multiple conventions. He joined NordicFuzzCon STEW (Staff and Crew) by the end of 2017, in time for the 2018 convention. He is also a member of the Furry Defence Force group with the rank "Sniper".[2]

Timmy Fox has fairly strong bond to his fursona[3] and likes to consider him being his "second half" or alter ego.

Feral 'Timmy' Fox is a Royal Cutefox, a fictional red fox/ fennec mix[4]species created by himself.

The size and shape of a Royal Cutefox are similar to that of a larger feral fennec, weighing roughly 11 pounds (5 kilos) when fully grown.[5] They sport oversized ears with pointy tips, each being a bit larger than the size of the head, as well as a very fluffy tail that is roughly the same length as the entire body. The paws are generally fairly round and oval-shaped, each containing three digits and no thumbs.

Feral's height, on four legs, is roughly 9 inches (23 centimeters) and 2 feet, 7 inches (78 centimeters) while standing on his hindlegs (including the ears).

The typical coloration of a Royal Cutefox is similar to that of the common red fox although with a few distinct differences:

Feral also has an anthropomorphic form which has a height of about 5 feet, 6 inches (168 centimeters). It features a very large pair of ears and tail, and his feet contain three toes each, just like his feral form. One notable difference is that the hands have an added thumb for a total of four fingers each instead of three digits on its feral form.[6] This form is however very rarely used as he prefers his feral shape.

He is fairly goofy, enjoys fun conversations, and is quite fond of humor. However, he is a introvert, so his mood and level of talkativeness may be dependent on his company, as he prefers smaller groups of people that he knows well as he may feel a tad uneasy otherwise.

He also is known to have a rather strong obsession with pie (a baked dish). This is mostly for humoristic effect but can also be applied to various role-playing scenarios where he can be seen interacting with a pie in several silly and humorous ways, for example, he might attempt to "hunt a wild pie" or dive into a pie much like a regular fox would dive into the snow. A pie could also be used to lure him into a trap. It is predicted that if he should ever stop liking pie, the world would end.

He possesses a few powers and abilities which he can use mostly as he pleases:

Timmy owns a digitigrade full suit which depicts his fursona. It was built by Faruku Costumes, and was first debuted at Eurofurence 23.[9]

He also owns a pair of handpaws, a tail as well as a set of ears, also related to his fursona, which he made himself.