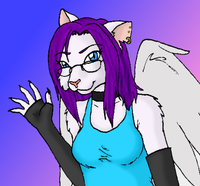 After meeting her friend Krissie Rainbow, she expanded her art repertoire to various media and forms, including still life, chibi, anthro, Sonic the Hedgehog style, feral, and various other forms.

TigressStar's fursona is a pure white tigress with feathered wings. The only markings on her white fur are two small stripes near the base of her long tail, and a black band near the tip.