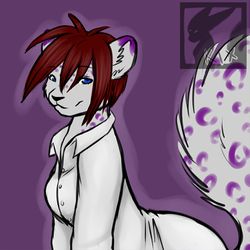 Tigger Fellini is a furry[1] and an online DJ.

Tigger's fursona is a Skepard (a Skunk/Snow Leopard hybrid).[2] She discovered the fandom at the age of twenty-one. As of October, 2009, she has been a part of All Fur Radio in Second Life for three years.

She resigned from AllFurRadio in August 2010 in a mass staff-walkout. Unlike most of the fellow SecondLife branch staff, she chose to join FurFusion Radio and worked for the technical team there before the station disbanded at the beginning of June 2011. During her time as a DJ she was most known for the 'Tuesday Asylum' that she co-hosted with another British fur (and her RL best friend) by the name of Tilf Legion Ravenwing (Tilf for short). Any updated news of her DJing exploits can be found on her Facebook page.[3] and she can also be found on Twitter [4]

Tigger spends a fair part of her time between both Furcadia and Secondlife, and when not there she, more often than not, associating with the various furs she has met online during her DJing career.

Tigger lives in Staffordshire, England, born June, 1983. She is an eager gamer for both console and PC games, she tends to lean more towards RPGs (Final Fantasy) or a select few First Person Shooters (normally Halo, Unreal Tournament or Doom). Her love for gaming however can often be found focused on more retro games and consoles, as a big fan of the original Mario and Sonic games from the 80s.

Though she is open about her real life to those who truly wish to know, she is adamant to keep the life of her character and herself separate though it is known that she is in a relationship with another member of the fandom, Kashi Commodore.