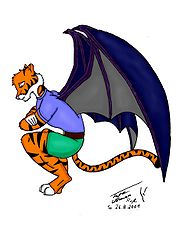 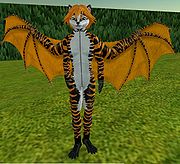 Image3 - showing off his wings

Aragon Tigerseye is a German fursuiter from the vicinity of Mönchengladbach, who lives there in a house with three other furries. He joined the furry fandom in the mid-1990s and became interested in fursuits at Eurofurence 4. While he is not building fursuits or taking care of Eurofurence's fursuit lounge, he is a puppeteer and puppet builder for the Eurofurence pawpet show, DoPE. He is also a gag author for the F8K radio show, frequently teaming up with Xan, one of his RL housemates.

Tigerseye is the helpdesk and character creation wizard of Furscape MUCK.

Aragon R. Tigerseye has been subject to a few changes over the years. Starting as a winged tiger (see image1), he remained like that for quite a few years until he, kindled by his love for rubber and latex, changed his form into a living latex form, becoming a rubberfur. Around that time he also adopted the R (for "Rubber") as middle initial and started calling himself RubberTigerseye on IRC.

He changed to a skunk with a tiger pattern. He still has his wings, usually retracted into his back when not in use.