Tiger of the Wind (Virginia)

From WikiFur, the furry encyclopedia.
Jump to: navigation, search
Community > People > Tiger of the Wind (Virginia)

This article is about the person. For the anime character, see Tiger of the Wind (Monster Rancher)

Tiger of the Wind is the furry persona of Ali Nazemi II an active member of both the online and real world furry community. A Virginia Tech graduate, he currently spends his days job hunting, working, WoWing, and partaking in all forms of debauchery. He currently resides in Blacksburg, Virginia. 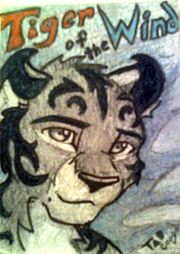 A rendition by Tad Cougar.

The tiger of the wind is a wind demigod whose primary purpose is to serve as the overseer of all the movement of air in a given environment. Despite the magnitude of such an undertaking as a deity he is well equipped to handle his charge. Due to the nature of many social role playing environments, Tiger's abilities are rarely needed and are often frowned upon. As such, he spends his most him time living the life of a big fluffy anthropomorphic white tiger.

The role that Tiger fills run in cycles equal to lifespan of whatever primary form the deity is born into. Power manifests at puberty as per standard cliche but often minor unconscience air control happens at a young age. Reawakening occurs as skills are honed and the keeper of wind recollects past lives as he or she is taught more by the wind itself.

Tiger himself cannot remember his name as identity is stricken when full power is reached. Put simply the wind carries away the name of the keeper. Tiger's childhood was less than charmed. His parents were taken by a car accident and at an early age he was raised by human in an orphanage. Though many of memories have been stripped, the abuse and cruelty suffered at the hands of humans has led him to remain in primarily furry environments where he can keep his contact with humans limited. At the age of 15, he reached full potential and destroyed the orphanage and all that he had ever known. From there he began a trek across many of the furry social environments where he became more aware of his purpose and status. His maturity has developed in time with his player's as they share ages.

The tiger of the wind can be found in several online social environments including Tapestries [Tiger_ofthe_Wind] and FurryMUCK [Tiger]. A somewhat less role play based version can be found on the FurNet IRC Network [TigeroftheWind]. 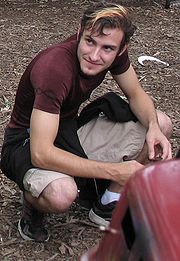 Tiger is actually a pretty normal guy once you peel off all the white fluffiness and godly powers. He's a biologist, sandwich delivery specialist, and generally overinvolved anime/furry/scifi geek with penchant for good booze and happy times. His hobbies involve DDR and music rhythm gaming, WoW, partying, bartending, and soccer refereeing.

Tiger currently owns and operates the #ddrfurs channel on the Furnet IRC network and coordinates the Anthrocon DDR tournament. He has participated in and been the victor in a few furry DDR events and loves to play in fursuit and partial suit. Currently he attends the occasional con and hosts parties in the Southwest Virginia furry community at what has become a strong furry hub. He also is a member of the Society of Anthropomorphics (SOAP) at Virginia Tech.