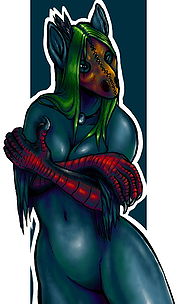 Tias, better known as Tias Macase, is a black hybrid avian. She was created by Banrai in early 1999 as a character for The Gryphon's Guild under the name of Makaze Darktalon. Her name was changed in early 2007 to substantiate a move by her creator to more serious endeavors.

Tias is a Synth in the storyline of Astian, a work-in-progress world. She is no longer a Gryphon, but instead a peculiar avian hybrid, a species native to the fantasy world she exists in.

Tias was sprayed in the face with a chemical gas in the Biowars, and she now wears a metal-plate mask to hide her hideously scarred features. Before this incident, she was quite famous in her own right as a model and fashion star. It is currently unknown what she actually looks like under her mask, and few care to speculate. She tends to others that have had the same horrible fate befall her due to the senseless wars, often using her skills as a tinkerer to create new body parts for the befallen people as she had to do for her own fiancee, fashioning him an entire new lower torso when he was hit by a bomb during his service in the armies. It is often hard to tell how Tias is feeling, since her mask hides all of her features except for her ice-blue eyes.

Her general attire is a red coffin-lining dress with a black scalloped top. Some days she wears a a pair of pants and a loose top. Her mask varies. The bottom has a small grating that allows for speech, and opens to allow for consumption of food and drink.

Originally, Tias was a black hawk/snow leopard hybrid Gryphon named "Makaze Darktalon". She was dubbed the 'EvilGryph' by some of her roleplaying partners, as her character history was dark and full of hatred and rage. She had killed her mother, her father, and all her siblings, and was bent on world domination, death and destruction. Banrai eventually left the Guild, however, and so the character became lesser-known.

Tias fell into a lull of disuse for a period of around three years, until Banrai was looking through some older work and decided to re-work the character into something more usable for her current projects.