Thygrrr is a male amur tiger, and is both a character and a fursona. 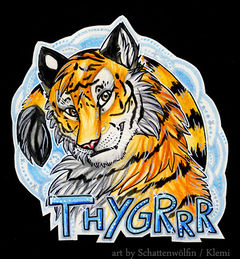 Thygrrr actually is a triad of characters, each slightly distinct from the others both in appearance as in content of character.

T. Altaica is a benevolent, playful and conversational character with all the standard features of a siberian tiger. T. Altaica may assume both anthropomorphic and non-morphic shapes and can shift between them freely. T. Altaica tends to hold the moral high ground at all times, based on the axioms that animals are free of sin and their spirits have no ulterior motives besides benevolently educating those that they guide. T. Altaica's world view is very naturalistic, and occasionally utilitarian, especially when confronted with dilemmas.

T. Darkfurre is a somewhat darker, more grown-up and much less naïve facet of T., often portrayed with darker fur. T. Darkfurre is nearly always anthropomorphic. T. Darkfurre often wears very distinguished clothes, such as a top hat, black 19th century suit, and a cane. He is an extraordinary gentleman and often engages in lengthy, profound discussions about morality, passion, or technology. T. Darkfurre is compatible with a steam punk view of nature and science, but may also exist in any epoch, especially in times of war.

T. Talaj, the blue tiger, is the digital aspect of Thygrrr. He exists both with white and with black stripes; the black version being more autonomous than the former, which is more of an avatar. T. Talaj is an "Elemental Mage: Information", representing his owner's ability and passion to work with information, data, and the machines that process them. T. Talaj possesses a very informationalistic and transhumanistic, even elementalistic perception of the world; while he playfully pretends that all technology is magic.