ThunderCats (or CosmoCats in some countries) is an American science fiction TV series which originally debuted in 1985. It features anthopomorphic animals who greatly resemble humans.

The original 1985 series focuses on the ThunderCats, six humanoids who are based on felines and come from the planet Thundera. Their home planet was destroyed, so they fled to a planet called Third Earth. Their arch-nemesis is an undead mummy called Mumm-Ra.

The Eye of Thundera, the insignia of the ThunderCats

On June 5, 2007, it was announced that Warner Brothers was making a CGI-animated feature film based on ThunderCats, but the project was canned. Instead, the original's creators decided to make a new animated show, and make it a reboot of the original. On July 29, 2011, a 1-hour double pilot episode was aired on Cartoon Network. The fans' reaction had been mostly very positive. Despite that, the series only lasted one season due to a decline in ratings and was cancelled in 2012 in favor of Legends of Chima.

On May 18, 2018, a video was released regarding the announcement of a third series based on ThunderCats.[1] The show's developers are Victor Courtright and Marly Halpern-Graser. The series will feature less realistic, cartoony animation and a more lighthearted, comedic tone than previous ThunderCats installments.

The premise of the show is similar to the original; the ThunderCats escape their dying homeworld Thundera only to crash land on Third Earth, facing off against various villains including Third Earth's evil overlord, Mumm-Ra. The announcement of the show garnered a severe backlash, with the announcement trailer receiving negative reviews from fans of the original 1980s series and the 2011 series, who have criticized the animation style, creators, and shift to comedy.[2] 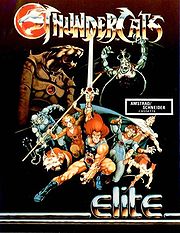 the Amstrad CPC version of the video game

Random House produced around a dozen Thundercats books between 1985 and 1987 intended for very young readers that might not be old enough to read the comics. Most of these were original stories set in the Thundercats universe. Almost all of these were illustrated books intended for beginners readers. There was also a coloring book: Mumm Ra Meets His Match, a Story to Color. Two choose your own adventure books for young adults were produced by Random House in 1985: Find Your Fantasy #3: Thundercats and the Ghost Warrior and Find Your Fantasy #4: Thundercats and the Snowmen of Hook Mountain.

Elite Systems developed a video game based on ThunderCats. It was released for the Amiga, Amstrad CPC, Atari ST, ZX Spectrum, and Commodore 64. In this game, the player would control Lion-O, who has to defeat Mumm-Ra's evil forces and rescue the other ThunderCats.