From WikiFur, the furry encyclopedia.
(Redirected from Thriller)
Jump to: navigation, search

Speed Demon, directed by Claymation innovator Will Vinton, was the Michael Jackson music video to the song of the same name as featured in the 1988 movie Moonwalker. 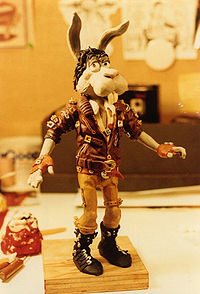 Photo and sculpture by Webster Colcord

In the film, Michael, in an attempt to avoid overzealous fans, finds a rabbit costume which he uses to disguise himself as an anthropomorphic rabbit named Spike, but ends up taunting the fans into chasing him.

During the chase, he morphs into other celebrities, including Sylvester Stallone, Tina Turner, and Pee-Wee Herman. After finally losing the fans, he removes the costume, which comes to life and challenges him to a dance-off.

In the end, a policeman tells him he is in a "No Moonwalking Zone", then sarcastically asks for his autograph (as opposed to "signature") on the ticket.

Just as Michael is preparing to leave, the rocky crag in front of him morphs into Spike's head who then nods to him, leaving Michael one-upped by his own alter-ego.