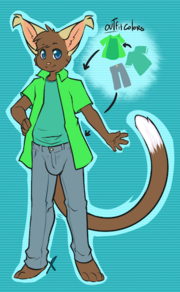 Threyon is a furry whose character is a feline anthro. He is an aspiring writer but, as yet, has not publicly published any of his works. He has commissioned several pieces of art of his character, as well as some of his original characters (some of which may feature in the aforementioned literary works).

The current incarnation of Threyon was first created in January of 2004 on FurryMUCK, usually appearing in the form of a small anthro feline of about three feet tall. Though childlike in appearance, he is merely an adult of short stature, though he has been known to take advantage of this, especially around females with maternal inclinations or an affinity for cuteness. His fur colors are a chocolate-brown on most of his body, with sand-colored ears and a white tailtip.