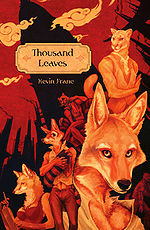 Thousand Leaves is an anthropomorphic novel by Rikoshi (Kevin Frane), published by Sofawolf Press in June 2008. The cover art and interior illustrations were done by Kamui.

Set in the titular city of Thousand Leaves—the capital of Ridgecrescent, a technologically-advanced but xenophobic nation—the story follows the lives of a small group of the city's inhabitants as a strange, unidentifiable syndrome begins to affect the populace. The central character, Reeve Wintrell, is a coyote who is among the first to suspect that something might be wrong; however, as his symptoms begin to exhibit themselves as paranoia, it rapidly becomes more difficult for him to find any help—especially since he's been cut off from his old social circle after a bad breakup with his ex-boyfriend, David.

Thousand Leaves was nominated in the Best Novel category for the 2008 Ursa Major Awards (the award itself was won by Kyell Gold's Waterways).