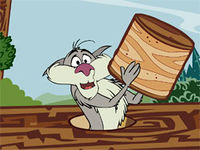 For some reason, Thomas is always having to extricate himself from beneath fallen trees.

Thomas Timberwolf was a flash cartoon from Warner Bros. Online. The series was created by the late animator Chuck Jones.

The cartoon was about the titular "Southern gentlewolf" who tried to avoid saying his name or a tree will fall on him.

After Chuck Jones and Maurice Noble passed away, the series was discontinued and the official site for the cartoon was removed from Warner Bros. Online.