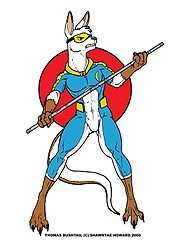 A member of the MechaRoos in Shawntae Howard's Extinctioners comic, Thomas Bushtail is the military machine inventor of the team, having designed the mech suits himself. He is also life-mated (married) to Tisha Roo Bushtail and father of their joey, Timothy. Naturally he also tends to be the "cautious thinker" type within the team, and more than once has to balance out his wife's spunky impulse ideas. Thomas loves creating machines, and often would prefer to be working in the shop as opposed to in the field. His weapon of choice is the staff, and as a hybrid, he possesses the power of telekinesis (though unlike his wife, he's more apt at using his power to move objects rather than create forcewaves).