Thibby, also known as ThibbyCat and previously Nanaki XIII (born November 9, 1989), is a furry musician and furry artist who lives in Utah, USA. He started his work in 2003 as a Sonic fan, and then became a full-fledged furry artist after leaving his SheezyArt account for DeviantART. After leaving his DeviantART, he moved to Fur Affinity. He also has galleries on Weasyl and Inkbunny. 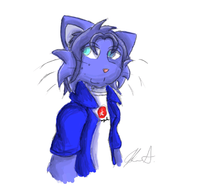 Nanaki XIII (Nanaki Thertin) was a short-hair, periwinkle colored house cat, but he did not know his exact breed. After several years of using the alias "Nanaki", he changed his name to "Thibby".

Nanaki writes, and plays songs for this Podcast

Nanaki XIII wrote songs, and submitted them to a podcast called TakingUpSpace. Hosted by Kraden, and his fellow hosts. He wrote songs such as "Whiny DevianTART", and "Furry Gallery."

The podcast is currently canceled for an unknown amount of time, and moved on over to the ACTfur On Air podcast, along with contributors of TUSpod, Kraden, RayLiehm and Fenris

First starting out on SheezyArt as a sprite animator in the Sonic fandom, he created two full flash movies called "Falling Up The Wall." He traditional art when he was 15. Since then, he put sprite animating behind, and perused his life as a furry artist. He started up his deviantART in 2004.

He started his Fur Affinity account in 2007. He spent most of his time writing his songs for Kraden's podcast, ACT Fur on AIR.